A new study, released today, has uncovered the first genetic evidence explaining the difference between how old we look and how old we are. 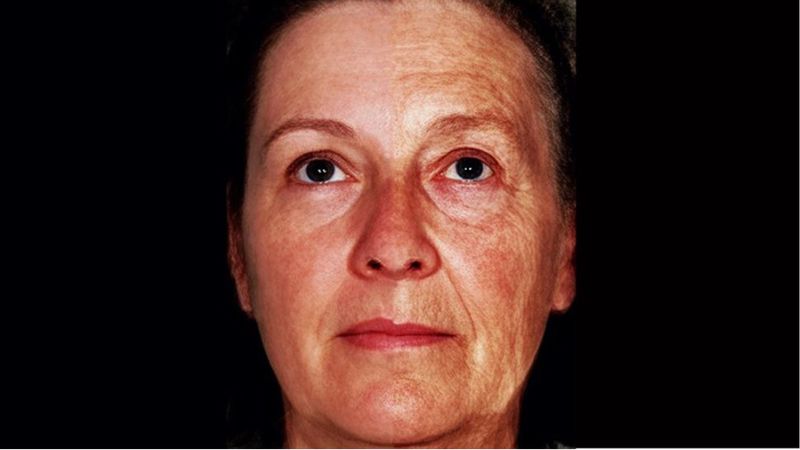 The impact of aging on human facial appearance as illustrated by the average face of 12 women aged 47 years (right facial side) and 12 women aged 70 years (left side). Aging effects facial skin such as wrinkling, uneven pigmentation, and facial structure such as lip size, nasolabial fold, with some people looking older, others younger for their age. Liu and colleagues report the first genetic study of perceived age, identifying DNA variants in the MC1R gene as associating with looking nearly 2-years older. Image copyright © Unilever – authorised for use in conjunction with the article.

Scientists hope that uncovering the secrets of what makes some people appear younger than others will lead to new discoveries to help everybody look younger for longer.

Researchers from Unilever, in conjunction with Erasmus MC University Medical Centre Rotterdam and other partners, made the discovery following a large collaborative study on ageing.

During the project, over 4,000 people were assessed for their youthful appearance in facial photographs, involving over 100,000 assessments of perceived age (how old they looked). The team then examined more than 8 million variants in the DNA of the participants to investigate whether those who looked young for the age carried different variants to those who looked old for their age.

This first-of-its-kind research, published this morning in the journal Current Biology, discovered that individuals with one form of a gene called MC1R looked two years older than those with a different form.

“This research is tremendously exciting and opens up brand new understanding of why some people maintain a more youthful appearance as they age.

“By learning the ‘secrets’ of those who look young for their age, we can find innovate ways to help everybody keep younger looking for longer in the future.”

“There is more work to be done of course but we are hopeful that this discovery could influence future product development and innovation at Unilever.”

“Discovering this first gene involved in perceived age is important, because it opens the door for identifying more, which we know exist, and we now know are possible to find.”

“Our finding marks another step in understanding aging differences between people and provides new leads to identify the molecular links between perceived age, chronological age, and biological age.”

“The next step is to understand on the molecular level why looking younger implies that you are healthier, eventually allowing to comprehend healthy ageing.”