Domestos is Pissed Off… 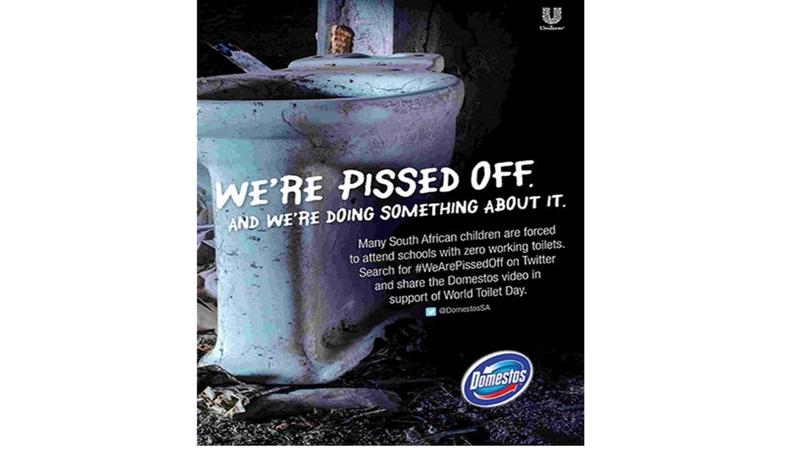 Domestos is pissed off about the poor state of sanitation in South Africa, and to show just how pissed off the brand is, it is doing something about it through sanitation programmes that have reached over 500 000 learners throughout the county.

To show just how Pissed off Domestos is, in the lead up to World Toilet Day, they are running a social media campaign using the hashtag #WeArePissedOff, that will see South African celebrities lend their voice to the fight against the sanitation crisis. Glen Lewis, Metro FM DJ; Khaya Dlanga, author and blogger and Trevor Gumbi, stand-up comedian and actor, have taken a stand with Domestos against the state of sanitation in South African public schools - restoring the dignity of the pupils.

South African radio DJ and TV personality, Phat Joe, expressed his rage at the state of poor sanitation in the country’s public schools.

“These learners, who will one day be leading our nation, have been left exposed to unhygienic conditions for too long! It is time we all get involved and show them that we are committed to seeing their development into the leaders we know they can become,” pronounced Phat Joe.

While being ‘pissed off’ creates awareness, taking action affects change. South Africans are encouraged to support and help Domestos in its efforts to make a change through the use of the hashtag #WeArePissedOff.

“Domestos recognises that government cannot do it alone. We are asking for public participation through this campaign - everyone who will participate online by sharing the video or content from this campaign with the hashtags #WeArePissedOff and #WorldToiletDay will be assisting Domestos in the provision of improved sanitation in public schools,” stated Cynthia Luthuli, Domestos’ Brand Manager.

Today, 2,4 billion people are struggling to lead healthy lives, keep their children alive and work their way to a better future – all because of a lack of a toilet. World Toilet Day, on 19 November, aims to raise awareness and inspire action to tackle the global sanitation crisis – a topic often neglected and shrouded in taboos.

Apart from the digital campaign, working with United Nations Children’s Fund (UNICEF) to advance the health and wellbeing of children worldwide, Domestos is committed to help 25 million people gain improved access to a toilet by 2020 globally.

Quality sanitation is a major issue the world over, particularly for women and children in public schools. In South Africa, a country with a population of nearly 52 million people, 8 000 of the over 24 000 public schools, meant to be havens for education, do not have flushing toilets.

Domestos and UNICEF, in its fourth year of their global partnership, aim to leverage on UNICEF’s global programme of advancing the health and wellbeing of children worldwide. In its first three years, the partnership reached over half a million learners with behavior-change sanitation programmes.

UNICEF believes that universal access to adequate sanitation is a fundamental need and human right, and access for all would go a long way in reducing illness and death, especially among children. According to UNICEF, each year, children lose school days due to afflictions such as diarrhoea, and some, especially in the developing world, also suffer from intestinal worms. Such hookworm infestations can lead to IQ loss and developmental disturbances.

On Friday 18 November, as a prelude to World Toilet Day, Unilever / Domestos in partnership with UNICEF will be handing over revamped toilets to 1096 learners at Isu’lihle Senior Primary School in Soweto.